Opening of the 34th Music in Perigord Festival: 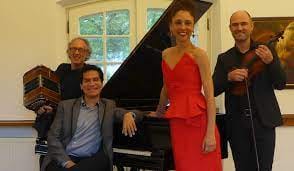 Yolanda Fresedo and her musicians - piano, violin and bandoneon - will pay a vibrant tribute to the world ofAstor Piazzolla, who died 30 years ago.

The Argentinean soprano Yolanda Fresedo studied singing at the National Conservatory of Buenos Airesof which she is a laureate. Based in Paris, she went through theEcole Normale de Musique in Paris in the class of Inva Mula, thanks to a grant from the Zaleski Foundation. She was awarded the prizes of Lyric Art and Concert Artist with unanimous congratulations of the jury. She also received a scholarship from the Istituto Musicale Gaspare Spontini in Italy, and studies with the tenor Giorgio Merighi.

Yolanda Fresedo performs regularly in Europe and America, at the International Kasseler Musiktagen in Germany, at the Miezyborowie Festival and the Centrum Kultury Grodzisk Mazowiecki in Poland, at the Goethe Institut in Paris, at the Musicamparts Festival, at the Volcadiva Festival and at the Opera de Massy in France, as well as at the Teatro Colón in Buenos Aires.

Discover her career and her programme
Your tickets online, concert of Wednesday 20 July 2022 in Le Bugue

Founded in 2019 in Geneva, the The Ernest Trio The Ernest Trio performs regularly in Switzerland and throughout Europe.
The Trio is an ensemble in residence at the Queen Elisabeth Music Chapel in the class of Miguel da Silva, Jean-Claude Vanden Eynden and the Artemis Quartet. It has already won six international prizes, including the Pro Musicis Prize (Paris), the first prize at the Verao Classico Chamber Music Award (Lisbon) and the Orpheus Competition (Zurich). The Trio has been a ProQuartet resident since October 2020. In June 2021 it will join the European Chamber Music Academy and works regularly with Patrick Jüdt.

Your tickets online, concert on Thursday 21 July 2022 in Audrix

Paolo Zanzu is today one of the leading figures in the world of harpsichord playing in Europe and worldwide. [...] He pursues an inspiring career as a concert performer and teacher. (France Musique)

After his studies in Italy, at the Conservatoire de Paris (CNSM), and at the Royal Academy of Music in London, Paolo Zanzu began a career as a harpsichord and fortepiano soloist. This has taken him to the major international stages (BBC Proms, Utrecht Early Music Festival, Cartagena International Music Festival, Festival de La Chaise-Dieu, Festival de Radio France Occitanie Montpellier).

In 2010 he is laureate of the International Harpsichord Competition in Bruges.

In 2017, after years of experience in various ensembles (Les Arts Florissants, Les Musiciens du Louvre, the English Baroque Soloists, the Monteverdi Choir, Le Cercle de l'Harmonie), Paolo Zanzu founded his own ensemble, Le Stagioni. An ensemble of varying size, bringing together musicians with major international careers as soloists and members of the great European ensembles on period instruments, around the great works of the 18th and 19th centuries.

Your tickets online, concert of Wednesday 20 July 2022 in Le Bugue

Summer Serenades explores the original repertoire for wind octet at the turn of the 18th and 19th centuries.

Programme: Serenade K 375 by W.A. Mozart and theopus 57 by Krommer.

Arrangements of operas for wind instruments, including the most famous Magic Flute.

Directed by violinist Daniel Cuiller since its creation in 1987, then by Guillaume Cuiller, the ensemble explores the music of the great composers of the Baroque age on period instruments, in a "historically informed" approach. It is also open to a later repertoire, up to the 19th century.

The record of Simphonies for the Royal Feast of the Count of Artois by François Francoeur in 2001 received a ffff award from Télérama. Research at the Bibliothèque Nationale leads to the world premiere of the lyrical tragedy Pirame and Thisbe (Rebel & Francoeur) with Angers Nantes Opéra in 2007. This recording was awarded the ffff distinction by Télérama and the "Selection" by France Musique.

The creation of the Te Deum for the Victories of Louis XV by Henry Madin, recorded at the Chapelle Royale de Versailles, was awarded a Clic by Classiquenews, a Choc by Classica and ffff Télérama in 2016. In 2018, Daniel Cuiller continues this work at the Château de Versailles with the Te Deum of Blanchard & Blamont, a disc awarded 5 diapasons.

Stradivaria also plays with renowned soloists and in 2009 recorded the Concertos for harpsichord by J.S. Bach with Bertrand Cuiller, a recording that received the 'Choc Classica' 2009 as well as the famous Critic's Choice of the British magazine Gramophone. For the bicentenary of the composer Jean-Louis Duport's death in 2017, Stradivaria is recording three of his Cello Concertos with Raphaël Pidoux, honouring this dandy virtuoso who, at the dawn of Romanticism, gave the French cello school a collection of concertos full of charm and elegance.

Your tickets online, concert of Wednesday 27 July 2022 at the Château de Campagne

This is a concert for young people and their parents, based on the prodigy composers - Mozart of course, but also Liszt and Saint-Saëns. Patrick Barbier, writer, music historian and lecturer, will shed light on the context of the works of these very young composers.

Patrick Barbier will be accompanied by Jean-Marc Pont Marchesi on the piano who will illustrate the mysteries of creation.

Your tickets online, concert on Thursday 28 July 2022 in Saint-Chamassy

The Toulouse Baroque Ensemble is the fruit of a long history of passion, encounters and friendship. This orchestra of professional musicians has come together around the same artistic project: the interpretation of early music, from Monteverdi to Haydn. Depending on the repertoire, it is joined by the Toulouse Baroque Choir, which has been part of the adventure since its creation over ten years ago.

From 4 to 50 musicians perform secular or religious works, with a predilection for the music of J.S. Bach, much of which remains unknown.

By choosing to play on early instruments, and by the stylistic research that this choice imposes, the Toulouse Baroque Ensemble wants to revive early music in all its freshness and intensity, and to share the curiosity and enthusiasm with which it interprets a repertoire that has yet to be discovered. Since its creation, the Toulouse Baroque Ensemble has experienced remarkable development and has taken part in numerous festivals in the Midi-Pyrénées region and throughout France: the international "Toulouse les Orgues" festival, the Lourdes Festival of Sacred Art, the 31 Notes d'Eté festival, the Sylvanès Festival of Sacred Music, the "Eclats de Voix" festival, the Moissac and St-Guilhem le Désert festivals, the Abbey School of Sorèze, and the Belvès festival, etc. Innovative, curious and full of original ideas, Michel Brun combines baroque music with audacity and fantasy, without sacrificing artistic excellence.

Your tickets online, concert on Friday 29 July 2022 in Saint-Cyprien

– Concerto for Trumpet and Orchestra in D Major by G. Torelli

- Concerto in E minor for recorder and traverso by G.P. Telemann

From 10 September to 19 December 2022, 4 concerts including the concert event with Eve and Matthieu Ricard and the duo Devin.