Patrick is a music historian, specialising in the baroque and romantic periods. He is a professor emeritus at the Université Catholique de l'Ouest, and the author of numerous works (Prix Thiers de l'Académie française for his Journey to Baroque Rome Grasset Publishing 2016)

He produces programmes for France Musique, and participates in many others (France 2, France 3, La 5).

He is the president of the Centro Studi Farinelli, about the famous castrato of which he is a recognised specialist. 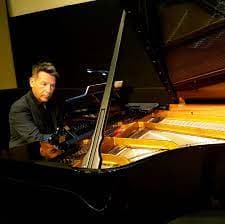 A respected pianist appreciated by artists for his imagination, his musicality and his great sensitivity to the voice, he was unanimously awarded the Gold Medal for piano at the Lyon Conservatoire, where he acquired an in-depth knowledge of the voice and the diversity of its repertoires. Jean-Marc Pont Marchesi directs the class of repertoire, melodies and lieder at the Conservatoires de Paris (CRR). He is now developing a concert activity in recital and with orchestra, in France and abroad, particularly in South East Asia: Tokyo, Singapore, Jakarta, Kuala Lumpur, Hong Kong (France-China Festival "French May"), Colombo...

Throughout the history of music, many child prodigies have remained famous, both for their compositions and their first public appearances. This concert will portray the whizz kids of classical music such as Mozart, Chopin, Beethoven or Saint-Saëns. All of them showed exceptional precocity: compositions at 5 or 7 years old, public concerts at 8 or 10.

Thanks to Patrick Barbier's entertaining account and the musical illustrations of the talented pianist Jean-Marc Pont Marchesi, this concert will give a better understanding of how, and in what kind of family context, they were able to acquire mastery of the piano and composition at such an early age, and what journeys or adventures they experienced with their entourage.

The small village of Saint-Chamassy occupies a strategic position between the valleys of the Dordogne and the Vézère, and has a dozen remarkable residences, including the castle of the village, partly burnt down during the wars of religion. The oldest part of the church of Saint-Eumach, which owes its name to Eumachus, confessor of the 6th century.It dates from the 15th century. It was attached to the town castle by a portal Gothic. This portal and part of the castle and thechurch were burned during the religious wars.