Eve and Matthieu Ricard with the duo Devin

Poems by Eve Ricard, projection of photos by Matthieu Ricard on 25 September 2022 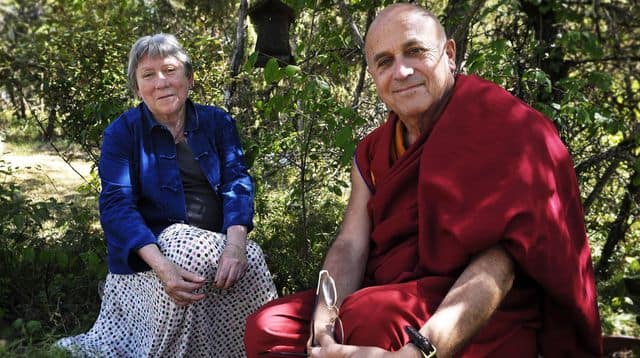 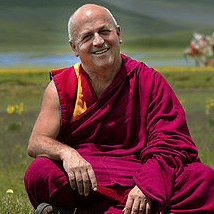 Who would have thought that poetry, music and photography, arts in their own right, could so easily blend together to create a moment filled with new sensations? Obviously, the alchemy of a sister and her brother helped bring these four artists together. The poetry of the words mingling with that of the notes melted in that of the colours and the images, for deep moments of escape.

There are totally unexpected encounters, on a station platform or at a birthday party, between people from different backgrounds who may end up with a common spirit...

A moment in a special and magical atmosphere.

Shards of life in 60 poemspreface by Christian Bobin

Ève Ricard lives as she writes, carrying the desire of what is to come, to live. So she tells us "it is never too late", the best is yet to come. She writes for us, to be with us. With words that are both simple and crystal-clear, she seeks to touch the exactness of beauty. Through her poems, Ève Ricard opens beings to the diamond reflections of the moment, where the blessed go. "What is precious about your text is its simplicity. It is the great naturalness of those who have not made poetry a profession, nor even an art or a habit: a breath, rather, a breath in the suspended night. Christian Bobin

Ève Ricard, a speech therapist by profession, is a French writer. The daughter of author Jean-François Revel and painter Yahne Le Toumelin, and the younger sister of writer and Buddhist monk Matthieu Ricard, she has suffered from Parkinson?s disease for many years and has drawn inspiration from it for her books. She is the author of Parkinson blues, The Lady of Words and A Star Dancing on Chaos.

"Matthew's spiritual life and his camera are one and the same, and this is where these fleeting and eternal images come from.

I started taking pictures when I was about twelve years old. I photographed puddles and reflections of light. People used to say, "Don't count on Matthew for family photos. I was not a city boy and always felt better in nature. I started to photograph more seriously at the age of fifteen, guided by my friend André Fatras, one of the pioneers of wildlife photography in France.

After settling in the Himalayas, I photographed my spiritual masters and their world. My aim was to share the splendour, strength and depth that I witnessed. I use photography as a source of hope, with the intention of restoring confidence in human nature and rekindling wonder at the wildness of the world.

My first photo book Journey to Enligthenment, The Life and World of Dilgo Khyentse Rinpoche, was published in the United States (Aperture, 1996) and then in France under the title L'Esprit du Tibet. I also published Dancing Monks of Tibet.

The power of a vision, of an image, is obvious as soon as it appears. I scrutinize it carefully to determine the best way to render it justice, the technique helping to find the subjective impression I felt when contemplating a scene. I like rich colours as much as I like "colour without colour": a white bird flying past a waterfall in falling snow. Danielle Föllmi once told me that I "paint with light", a nice compliment.

When I was making the images for Un voyage immobile, the Himalayas seen from a hermitage, I sat in the same place for a year, as if waiting for the light. But I wasn't waiting for anything, and I didn't plan to write a book: I was simply staying in my hermitage to make a retreat. From dawn to dusk, I contemplated a sublime landscape: the Himalayan range unfolded majestically before my eyes. Sometimes, an impromptu light would light up the scene for a few moments and I would take some pictures. The "magic moments" that make up this collection, all captured from the terrace of my hermitage or a few hundred metres away, are the fruit of this "waiting without waiting", of the harmony of nature mingling with the bliss of meditation.

Sometimes I don't take any pictures for months. Then the day comes when the people, the place and the light appear in such a beautiful way that I cannot resist making an image, an offering to all those who will lay their eyes on it. Cartier-Bresson said, "Photos take me, not the other way around. The ideal is to live in the place where you are photographing, so that time works in your favour: that an exceptional scene is offered to your eyes and you are present.

I have often contemplated and admired the work of the great photographers of the past, Ansel Adams, Ernst Haas (his masterpiece The Creation, in particular, which I revisit regularly), Galen Rowell and many others. I have made friends with a number of photographers whom I admire ? Henri-Cartier Bresson whom I knew as a teenager and became close to, Jim Brandenburg, Vincent Munier and Yann Arthus Bertrand, to name but a few. I continue to learn from them. Sometimes I look at a particularly striking or inspiring image and spend a long time absorbing its beauty, its composition, or the message it conveys, an image that will remain in my memory and enrich my way of seeing. A successful photograph is one that you never tire of looking at and that gives you a feeling of elevation.

Matthieu Ricard, born in France in 1946 and son of French philosopher Jean-François Revel and painter Yahne Le Toumelin, is a Buddhist monk, humanitarian, author of books, translator and photographer. After a first trip to India in 1967 where he met great Tibetan spiritual masters, including his main masters, Kangyur Rinpoche and Dilgo Khyentse Rinpoche, he completed his doctorate in cellular genetics in 1972, and left to settle permanently in the Himalayan region where he has now lived for over 50 years.

A Buddhist monk, Matthieu Ricard shares all forms of beauty through his art, whether they are spiritual, human, altruistic, or emanate from the wild side of the world. 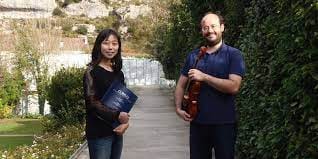 THE PROGRAMME of the duo Devin

- Bach: Largo from the 3rd Sonata for solo violin

- Ravel: Pavane for a Dead Princess

Concert-event with poems by Eve and photos by Matthieu Ricard, accompanied by the duo Devin, on 25 September 2022 at 5pm at the Pôle d'Interprétation de la Préhistoire des Eyzies

The Prehistory Interpretation Centre is part of a global and common approach to promoting the heritage, cultural, tourist and landscape resources of the Vézère valley.

It is a place for exhibitions, conferences and documentation, culture and education. Concert by the Libera me ensemble on 23 October 2022

Concert by the Ensemble Jacques Moderne on 17 December 2022